How a Diesel Engine Works 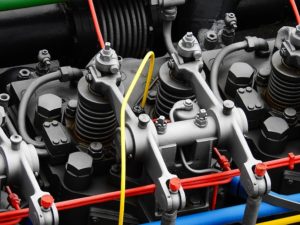 Most people don’t spend a lot of time thinking about engines unless there’s something that stops working in their car. Engines are actually really fascinating, especially once you learn the difference between gasoline and diesel engines. Diesel engines are usually associated with huge trucks and clouds of smoke but there’s more to them than that. They are very powerful, strong, and fuel efficient engines.

The diesel engine was invented by a German man named Rudolf Diesel when he found a way to improve the existing internal combustion engine using higher temperatures and pressures.

Like a gasoline engine, a diesel engine runs on internal combustion, meaning that it burns fuel inside the body of the engine rather than externally. This is more fuel efficient than an external engine because there isn’t a separation between where the heat is produced and where it is used.

The “stroke” count of the engine generally refers to how many stages it has. In a four-stroke engine, there are four stages. The air is drawn into the cylinder through a valve. Then the piston moves up and compresses the air, heating it and the fuel is injected and spontaneously ignites. The heat from this combustion pushes the piston down, turning the crankshaft. Finally, the piston returns to its position, forcing the air back out of the valve, which opens to allow it to escape. In a two-stroke engine, there are three stages, though the piston moves only once as opposed to the twice in a four-stroke engine. The process starts when new air flows into the cylinder and pushes out the old air. The valves close and the piston moves up, compressing and heating the air, which ignites the fuel as it is injected. Finally the combustion of the fuel pushes the piston back down which turns the crankshaft and powers the wheels.

Baltimore Freight-Liner Western For All Your Trucking Needs

Whether you are looking to upgrade your fleet to tow trucks or simply interested in the latest trucking technology, you can rely on Baltimore Freightliner-Western Star. We have provided top-notch service for the trucking industry for 30 years and would love to assist you in buying a new top-of-the-line truck, finding the specialty parts you need, or repairing your truck. Give us a call toll-free at 800-832-7278 or locally at 410-685-4474, or contact us online. To find out more about what we are up to, follow us on Facebook, Twitter, and Pinterest.

This entry was posted on Monday, June 24th, 2019 at and is filed under Trucking Basics . You can follow any responses to this entry through the RSS 2.0 feed. Both comments and pings are currently closed.